President Barack Obama believes that there should be some compromise when it comes to protecting the United States from terrorists and criminals while ensuring people’s privacy. When confronted about the issues around encryption and personal data with the government’s case against Apple, the 44th president believes that we shouldn’t take an “absolutist view.”

Speaking at the South by Southwest Interactive conference in Austin, Texas, Obama spoke about how he wants to get the American people and the tech industry to help modernize the government. The Texas Tribune editor-in-chief Evan Smith asked what the president’s view is on the case and although he couldn’t comment about the specifics, Obama believes the government can’t “willy-nilly” get into people’s smartphones.

“All of us value our privacy and this is a society that is built on a constitution, a Bill of Rights, and a healthy skepticism about overreaching government power. Before smartphones were invented, and to this day, if there is probable cause to think that you have abducted a child, are engaging in a terrorist plot, or if you’re guilty of a serious crime, law enforcement can appear at your doorstep, say they have a warrant to search your home, and rifle through your underwear to see if there’s any evidence of wrongdoing. And we agree on that because we recognize that with all our rights, there will be some constraints we’ll impose to ensure that we’re safe, secure, and living in a civilized society.”

“Technology is evolving so rapidly that new questions are being asked. I am of the view that that there are very real reasons why the government can’t wiley-niley get into people’s smartphones that are full of very personal information and data,” he said. Obama attributed an elevated distrust of the government thanks to the work by Edward Snowden. 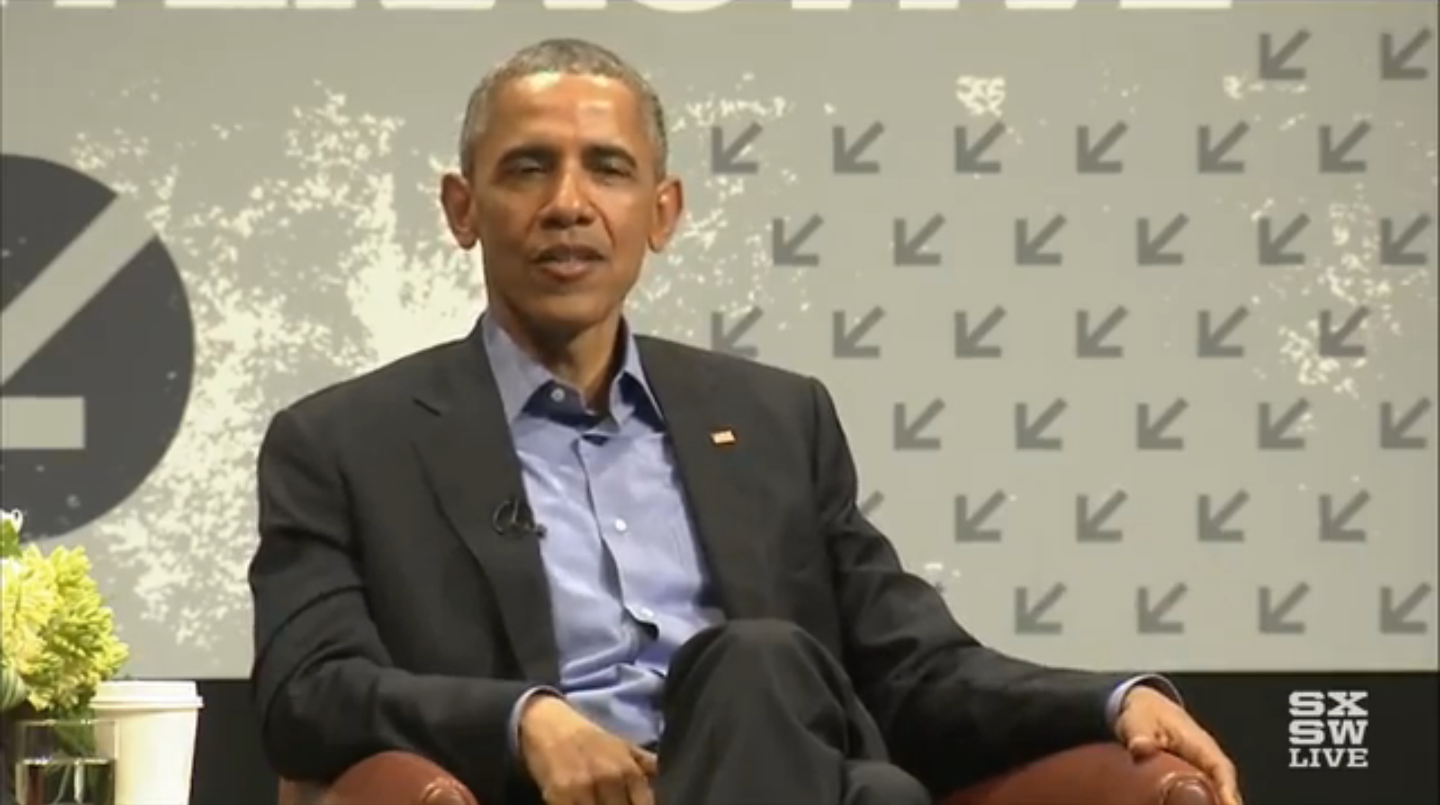 Above: President Obama speaks at the South by Southwest Interactive conference on March 11, 2016 in Austin, Texas about civic engagement

He acknowledged that the desire to have really strong encryption also complicates things, saying that the two values of privacy and security are very important. “There has to be some concession to the need to get into the information [on smartphones],” Obama commented. “Folks on encryption side will argue that any key whatsoever, even if it’s directed at one device, will be used on every device. That is a technical question. I’m not a software engineer. It’s technically true, but it can be overstated. The question then becomes we as a society, set aside the specific case between FBI and Apple, the commercial interests, concerns about what the Chinese government could do, we’re going to have to make some decisions about how we balance these risks.” He said that the government has been working with the tech industry to solve this issue.

The president confessed that he’s on the side of civil liberties. “I anguish over the decisions we make to keep the country safe. The dangers are real…I caution against taking an absolutist view on this. We make the concessions because we recognize it’s important. We have stops for drunk drivers, and it’s an intrusion, but we think it’s an important thing to do.”

Obama continued by saying that “We do have to make sure that given the power of the internet, it’s narrowed and constrained. I’m confident that it can be solved, but we’ll need the tech community to help us solve this stuff. What will happen is that, if people go to their respective corners and the tech community says that we either have strong encryption or it’ll be an Orwellian world, when something bad happens, the politics will swing.” He believes then that when a fix gets implemented, it will be sloppy, rushed, and won’t be thought through. “You’ll have dangers to our civil liberties because those that can do it best have been engaged.”

His appearance at SXSW was not about the ongoing FBI and Apple debate but more about how the tech industry can help to improve people’s access to the government, making it more efficient, although he did cast some doubt on innovation helping the Texas government.

“This gathering brings together people that are at the cutting edges of these changes,” he said. “It offers enormous opportunities that are disruptive and unsettling. It empowers individuals to do things that they could never do before and also those that are extremely dangerous to spread their message. We’re trying to find ways in which our government can be a part of the positive change that is taking place and we want to help convene and catalyze folks in the private and nonprofit sectors to be a part of the broader community.”

He continued: “This group is prime to make a difference: How can we make government work better through tech, digital platforms, and so forth.” Obama cites the government’s efforts to reduce the FAFSA form by two-third just by digitizing it, putting it online, and making it more common sense, along with making it possible to apply for Social Security online.

“The most important office in a democracy is the office of the citizen,” the president declared. “Our politics isn’t working as well as it should.” 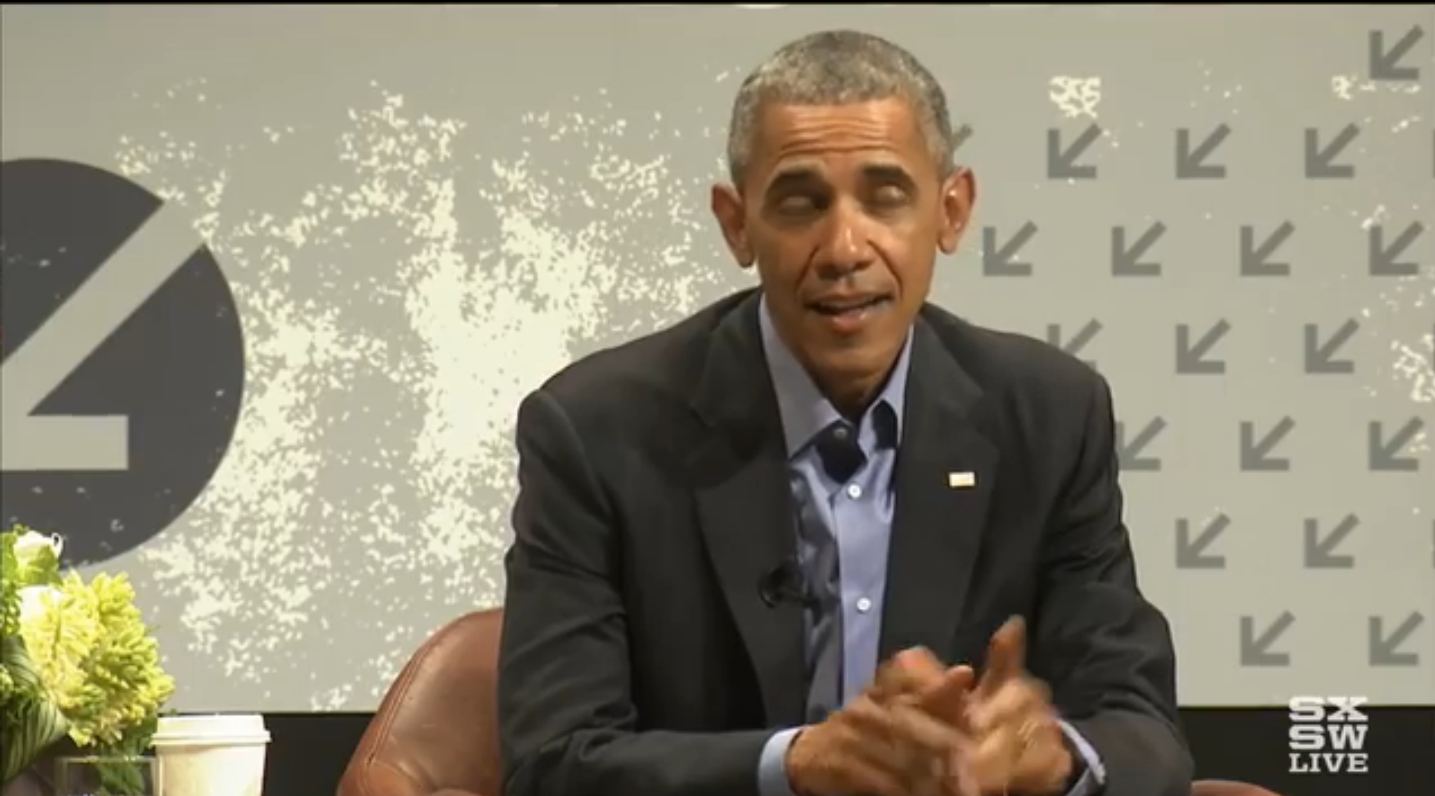 Above: President Obama speaks at the South by Southwest Interactive conference on March 11, 2016 in Austin, Texas about civic engagement

“We cannot solve the problems in government and in society unless we, the people, are paying attention,” he concluded. “In an age where people are getting information from digital platforms through the internet where people’s attention spans have shrunk, it’s critical for people who are shaping the environment is thinking about how to get citizens engaged. Doesn’t mean that you have to do it full time or run for office yourself. Whatever your field is, there’s a way for you to engage and participate to take this democracy back and change it in new ways.”

Stacy Donohue, investment partner at the Omiydar Network, issued a statement following Obama’s keynote, saying “Today President Obama called on the tech community to step up and solve the big problems facing society. Civic technology is connecting citizens, technologists and government to improve voter participation, drive better delivery of government services and place citizens at the heart of better government. This collaboration can solve these problems, but for it to really deliver at scale we will need more levels of government providing greater access to data, more funders recognizing the potential of the sector and crowding in capital to accelerate growth and impact, and more people using these digital solutions to demand better public services and hold government to account.”

Held at the Long Center just a few blocks away from the Austin Convention Center, attendees were chosen by a drawing and had to arrive hours before the president arrived. Beforehand, Obama stopped by Torchy’s to order a Democrat, Republican, and Independent taco.

Obama’s visit to the SXSW conference makes him the first sitting president to visit this annual festival taking place in Austin, Texas. Last week, he used his weekly address to explain that he’s looking to the technology sector for help in modernizing the federal government. Obama’s message centered around “asking everyone from all walks of life working inside and outside of government to help make this democracy even stronger.”

His administration is no stranger to reaching out to technology companies, specifically Silicon Valley. From not only tapping multiple luminaries from the Bay Area, the White House has used it to promote proposals and rationale for executive orders. Obama also established a tech hub in Silicon Valley, where the government plans to invest $171 million to work with Apple, Hewlett-Packard, Boeing, General Motors, and other companies on wearable devices.