12 MarHearthstone’s Whispers of the Old Gods expansion is all about engagement in a $1.2B market

Hearthstone: Heroes of Warcraft is about to get an injection of new cards … and tentacles.

Whispers of the Old Gods is the collectible card game’s third expansion, Blizzard Entertainment revealed today, and players should get their dances with the H.P. Lovecraft-inspired devils toward the end of April or the beginning of May. It’s just one of a series of major updates coming to Hearthstone, the market leader in the $1.2 billion digital card game market (according to market research SuperData), as it prepares for the biggest changes in its two-year history: the launch of the new Standard and Wild formats — which are hitting at the same time as this 134-card expansion.

A patch next week adds more deck slots (doubling from 9 to 18) and Deck Recipes. Players have been asking for additional room to store decks throughout Hearthstone’s life, and the new Deck Recipes will help beginning players (or those that just need some guidance) build decks around either the base set of cards or specific themes. Both of these are tactics that Blizzard is employing to improve engagement and retention in a game that’s made $500 million, according to an estimate from SuperData.

Hearthstone gets darker (well, as dark as a game about two people playing cards in a made-up tavern in a made-up world can get) with Whispers of the Old Gods, and like with the recent League of Explorers adventure, the designers get to tell a story that doesn’t come from a raid or event in World of Warcraft. These beings have immense power, having enslaved Ragnaros and the other Elemental Lords, created the arachnid Nerubians, and hell, they even corrupted a mighty dragon, turning it into Deathwing, one of most destructive powers in Azeroth.

And its in that corruption, the twisting of the natural order, that these beings have their power.

“They’ve been affecting Hearthstone for a long time,” said senior game designer Ben Brode. “Their control is influence, slowly corrupting things around them.”

The expansion has been in the works for about a year, though the Old Gods has been an idea that’s been bandied about since Hearthstone’s earliest development. It doesn’t contain any new keywords, such as the Discover or Inspire mechanics, nor does it have new tribes to join Murlocs, Mechs, and the others in the game. The set will appear in the Arena mode as well after it debuts.

Above: “My dream ends — your nightmare begins.”

Their influence is even being felt in how Blizzard is introducing this set. The corruption of the Old Gods is bursting out of Hearthstone store. With this set, Blizzard is giving away a legendary — C’Thun, a bulbous being of eyes and tentacles, and two copies of one of its cultists, the Beckoner of Evil. Players who log into Hearthstone during a special promo period receive three free Whispers card packs.

What’s interesting about this set, at least with the cards we saw, is how the cultists work with the Old Gods. C’Thun’s followers all boost his strength and health, even if it’s not on the board and in your hand or your deck. An image of C’Thun pops out from the left side of the screen, and you can see him getting stronger. And when he hits the board, he sends out purple shots of doom, one for as many attack he has, to all your minions and your character.

The many eyed-and-tentacled one himself is a 6 attack, 6 health minion that costs 10 mana. But he’ll rarely appear at that power level, for his servants, the Beckoner of Evil and the Twilight Elder, work together to make him stronger. Their faith in his power boosts his attack and health, reaching some ridiculous levels. In an interview later in the day, senior designer Mike Donais went over one scenario that happened in playtesting where C’thun got to 30/30, and when he came onto the board, it dealt out 60 damage because Brann Bronzebeard, which duplicates your card’s Battlecries, was also in play. 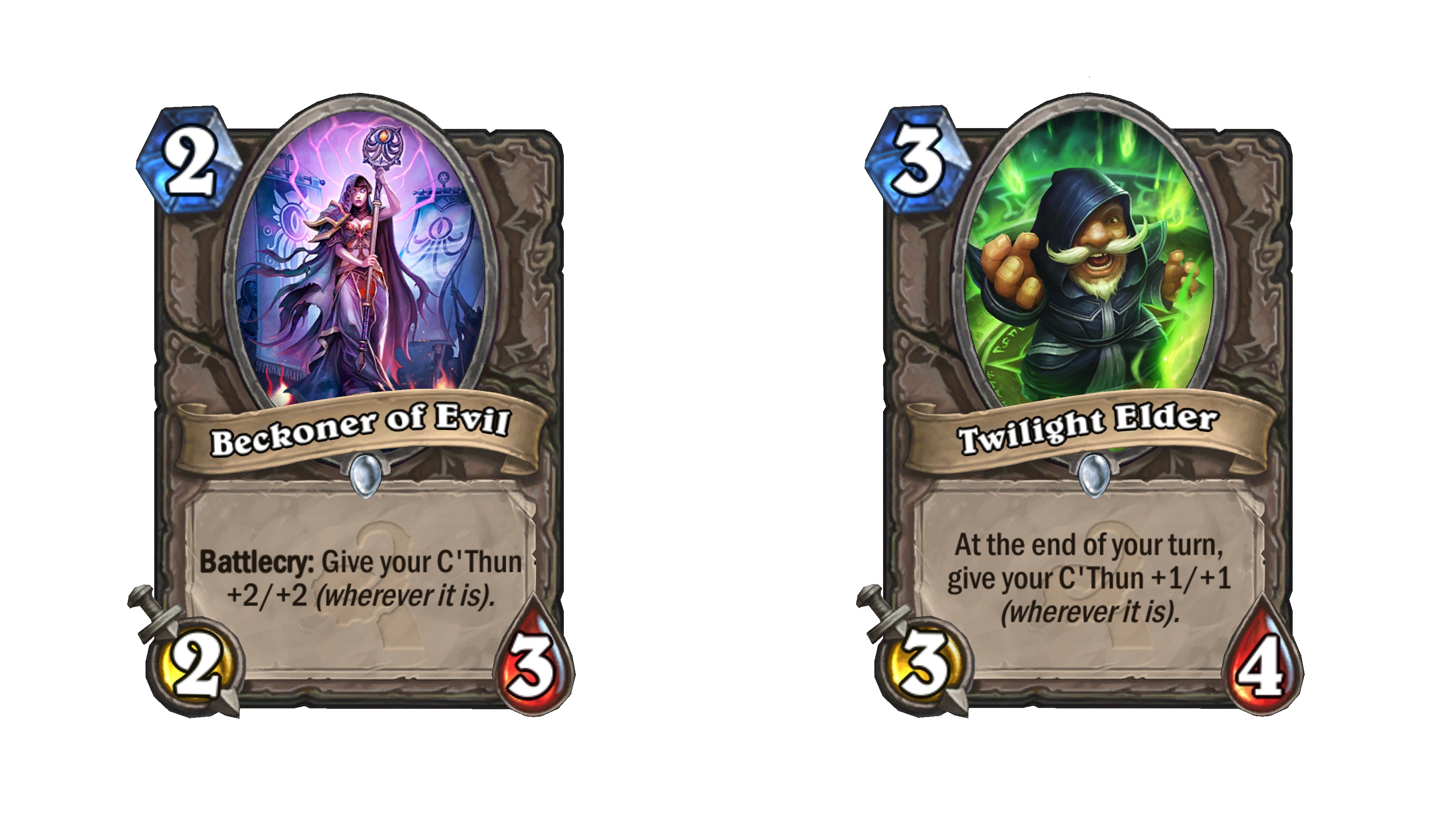 Above: The Cult of Extraordinary Icky Evil.

The Beckoner of Evil is a 2 attack, 3 health minion for 2 mana, and she gives C’thun an immediate +2/+2 boost no matter where he is. Her accomplice is the Twilight Elder, who at a well-costed 3 attack and 4 health for 3 mana gives the Old God a +1/+1 buff at the end of the player’s turn. These cards can quickly steamroll the effect, especially when a someone plays two Beckoners before Turn 3.

During a presentation Wednesday at Blizzard’s campus in Irvine, California, Brode and senior game producer Yong Woo shared their excitement about these cultists.

“They’re not slowly corrupted — they’re all-in,” Woo said. “They make C’thun more powerful wherever played — see it happens, gruesome tentacle-y portal opens, getting more powerful. Sixteen cards that interact with C’thun one or more ways — really excited to have a card like C’thun.”

C’thun and his merry band of elder evils have spread their special form of love to other minions in Hearthstone. Blizzard showed off three other neutral minions who bore the taint of the Old Gods, and each take an existing card and change it.

Meet the Polluted Hoarder. This gnome was just greedy before, trying to grab loot he had no right to take, but now, he’s found a nasty surprise in a chest that should contain gold and jewels.

He’s not just evil-looking and toting around a box oozing tentacles — at 4 attack and 2 health for 4 mana, he’s twice as strong as the existing Loot Hoarder, a member of the Classic set (making him a permanent part of Standard). His Deathrattle, draw a card, remains unchanged.

“It’s a way to see the influence of the old gods working. Everything is twice as big — two times attack, two times health,” Woo said. “Twisting it makes a bizarro version — Wario to Mario.”

The Corrupted Healbot twists the Antique Healbot, which heals you for 8 health when you play it. Now, this 6 attack, 6 health minion has a Deathrattle — healing your foe for 8 health when it’s destroyed. This evil-twin version, as Woo called it, still costs 5 mana, and it fills the role of Zombie Chow from the non-Standard Curse of Naxxramas set as a powerful minion with a hefty drawback.

Above: Watch for those syringe guns!

But it’s only a drawback if you have a limited imagination.

“I love looking at cards and thinking of ways to turn downside into a tactical advantage — play with Auchenai (Soulpriest, a Priest card that turns healing effects into damage), for example,” Woo said as Brode marveled at this dual-syringe guns and pointed out the tentacle-like appendages coming out of the bot’s back.

The next minion is getting his “I told you so” moment.

“One minion’s been calling it, been telling you so,” said Brode as he showed the Validated Doomsayer. The whispers of C’thun and his brethren had the Doomsayer predicting the end of the world, and when this 0 attack, 7 mana minion was played, he would wipe the board at the start of your next turn. He’s now 5 mana, and if he survives one turn after you play him, his attack grows to 7. He’s the same mechanic — surviving one turn — but with a twist, just like other minions in the set.

Above: Told ya so!

Oh, and he’s quite happy now, too.

“He had a self-fulfilling prophecy before — now it’s his time to party,” Woo said. “He’s now happy.”

What about the other Old Gods?

The other elder evils of Azeroth are Y’Shaarj, Yogg-Saron, and N’Zoth, but for this presentation, Brode and Woo didn’t talk about them. Later interviews with other members of Team 5, Blizzard’s Hearthstone development squad, were mum about the other cards we could expect from this trio. C’thun is among 16 cards that interact with his camp, and the Hearthstone designers didn’t say if the other Old Gods would get the same amount of complementary cards.

Donais did note that Paladin would get a card (or cards) that are like “a cleanser,” fitting the theme of a good and godly warrior combating the risen evil. Warlock would get dark cards, since corruption fits the class’s theme as well.

With previous expansions, Blizzard offered a preview for players to tinker with before the set debuted. For Goblins vs. Gnomes, cards appeared in Arena for drafting into a deck, and for The Grand Tournament, a Tavern Brawl (a more casual mode with a new challenge that appears each week) showed off some cards. Woo didn’t commit to anything like this happening for Whispers of the Old Gods.

“We like trying new things to introduce a set to new players,” Woo said. “This time around, there’s a lot happening.”

But they did note that when the patch goes live Monday, players will be able to buy 50 Whispers of the Old Gods packs for $50, bagging a special C’thun-themed cardback for ordering before the cards are available to play. This cardback is also the first with an animation — the eyes move.