The developer preview of Android N, the upcoming version of Google’s Android mobile operating system, comes with a few new features that build on its predecessor, Android Marshmallow, right out of the box (and more new stuff will arrive in previews to follow). One highlight of this initial preview is a split-screen mode that works in both portrait and landscape orientations on smartphones and tablets.

Split-screen is particularly impressive on Google’s recently released Pixel C convertible tablet, which is one of just two tablets that can run this first developer preview. The other is the Nexus 9. Sure, split-screen does work on Android phones — I’ve been experimenting with it on a Nexus 5X — but on tablets it looks more impressive, and you can be more productive.

The change is important because it will give Android feature parity. Microsoft’s Surface, and any other convertible tablet that runs Windows, lets you split your screen like a champ with little tinkering, and for years Samsung has included Multi Window mode on its phones and tablets, and Apple just recently rolled out its take on multi-window functionality, but for just a single iOS device. 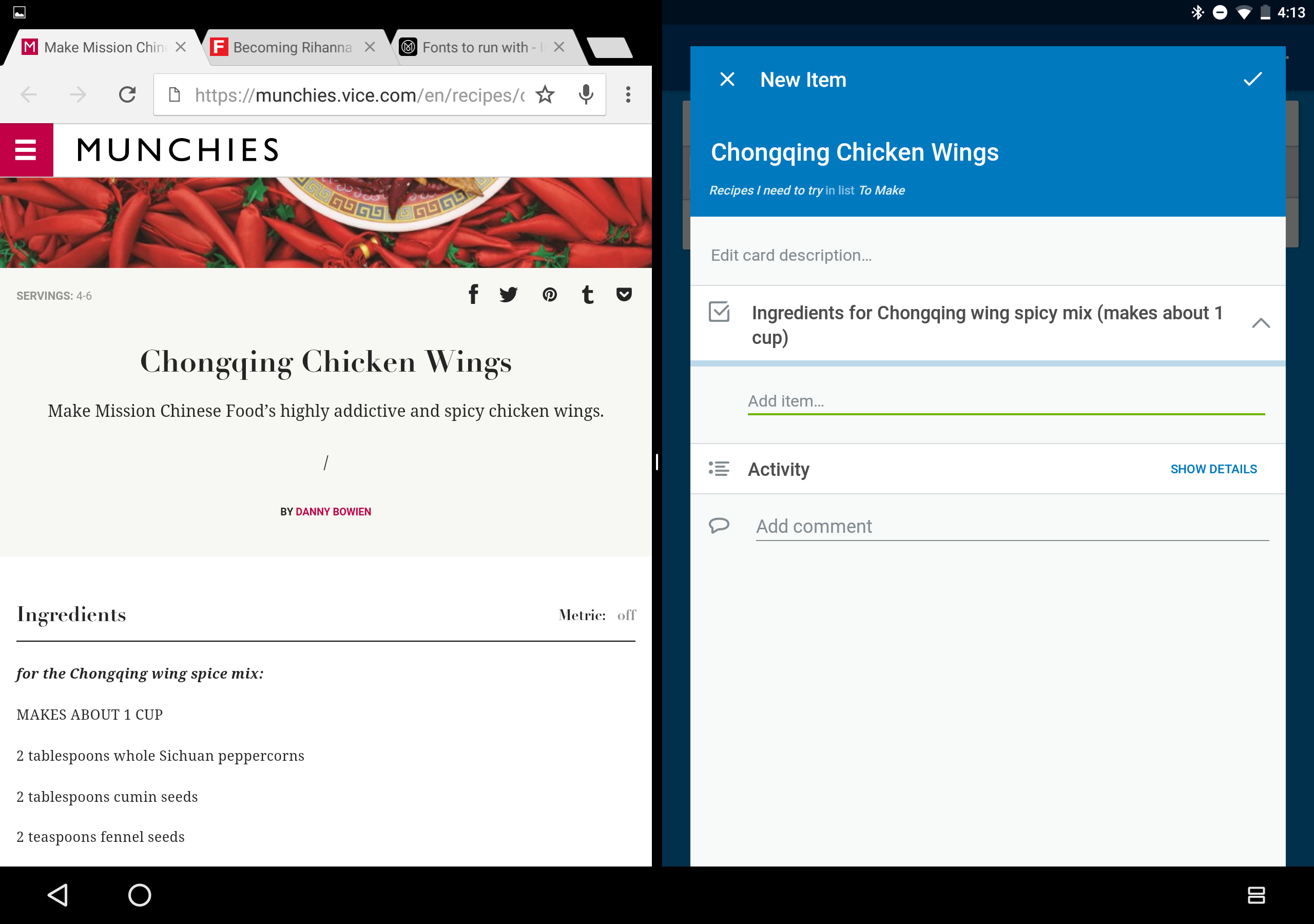 Above: When I find recipes I want to make, I put them in Trello, so I can check off ingredients as I pick them up in the store. Getting recipes into Trello on mobile is now considerably easier. 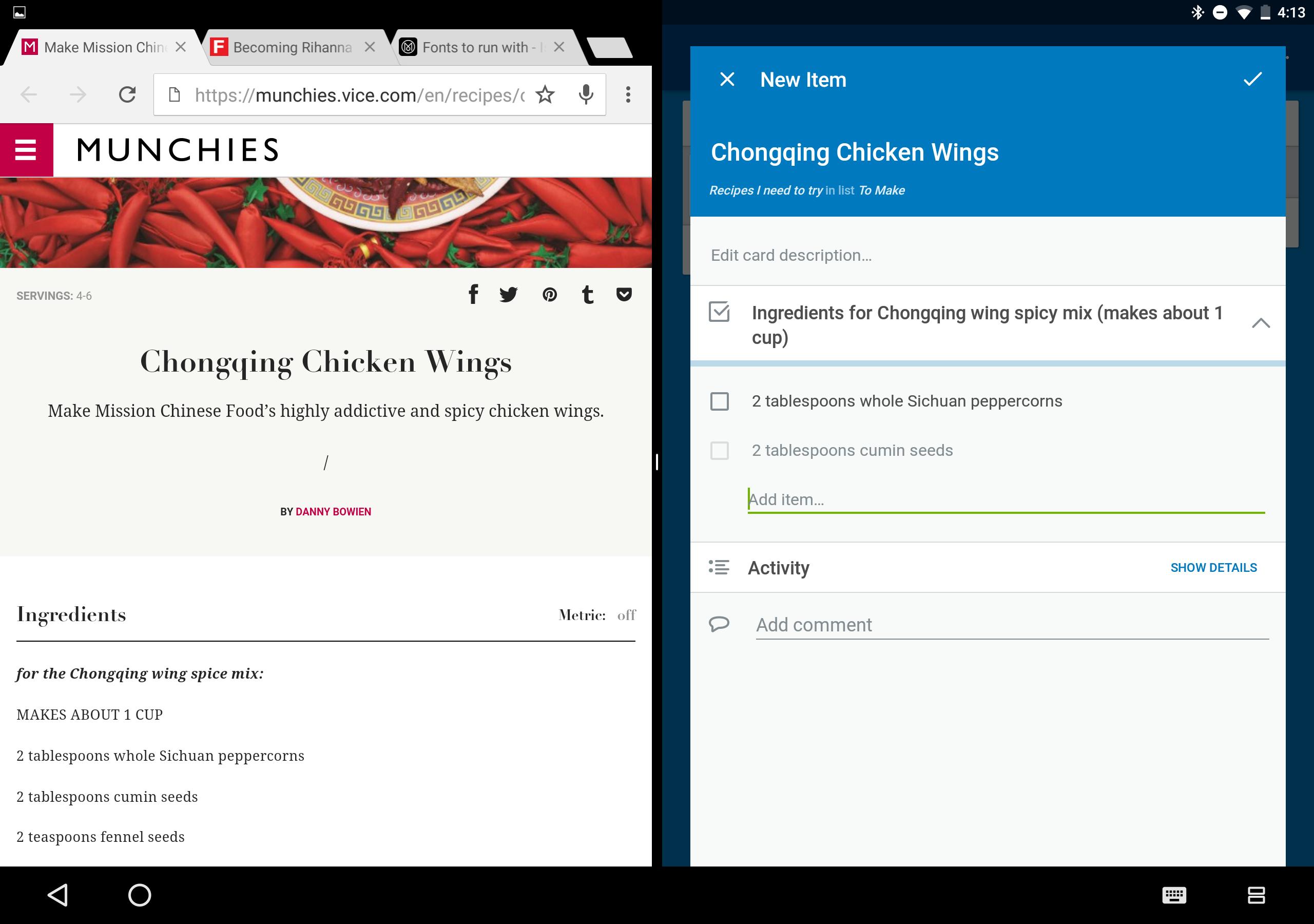 When you compare it with the Split View feature that came with the iPad Pro, the split-screen mode in Android N is more flexible.

You can adjust the slider between the two windows being shown on the display. Well, to a certain point — you can’t make one window take up less than about a third of the display. With the iPad Pro, Split View in landscape mode only lets you give windows an approximately 75/25 split or a 50/50 split. Split View in portrait on iPad Pro doesn’t even let you adjust the proportions; you’re stuck at 60/40. With that said, Android N is less flexible on a phone than on a tablet — that is, you can’t move the slider in landscape mode.

And unfortunately at the moment, not all apps work with Android N’s split-screen feature. For example Uber, Lyft, Snapchat, Instagram, and Minecraft: Pocket Edition don’t permit you to give anything less than the whole screen. The same problem hampers Split View on the iPad Pro.

The feature does have bugs. Some views in certain apps just don’t load right. But this is just one week into a developer preview. Google and third-party app developers should smooth out some of these kinks in the next few months, leading up to the official release of Android N.

But even with these shortcomings, the arrival of split-screen on Android N is a revelation about what you can get done on your Android device. Keep an eye on Twitter while you’re doing stuff in Chrome? Of course. Talking with your teammates on Slack while you’re dealing with email in Gmail? Sure. Talk with someone on Messenger while drawing stuff in Autodesk SketchBook? You got it. Adding a Trello card while you’re watching a YouTube video? Yup. On and on and on. App switching is just downright less time-consuming and error-prone when you can have two apps open at once.

On the Pixel C, this feature works especially well, because you can type fast on its sturdy keyboard and have the screen propped up at a comfortable angle. Tablet computing starts to feel like less of a novelty and more like desktop computing. And for an Android device that’s exciting.